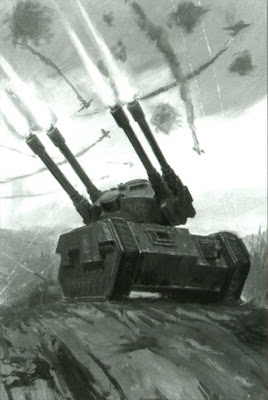 I know I have not posted a lot about Warhammer 40k in the past few months, and in truth I have not been deep into the game lately. Imperial Guard has gone a bit stale for me, and I just was not enjoying Chaos Marines like I thought I should, or would.

Yet I tried to keep up on the latest and greatest, and watched the new codex's move out into the world and create chaos on how the game can be played. The number one complaint that I have seen from those around me, is how crazy good the Wave Serpents are now, with their crazy amount of firepower, their ability to jink our of nearly everything, and then make any penetrating hits be reduced to glancing becomes quickly frustrating, and nearly impossible to deal with.

The current method to deal with them is to either dump ridiculous amounts of firepower into them, leaving the rest of his army untouched, or use a drop pod to plop down behind him and unload into the backside, making the shield worthless. The problem with that is against armies with intercept (aka Tau) that list gets blown out of the water. So what do we do?

So we need someone/something to help balance it out... well, my friends up at my FLGS think we might have stumbled upon the solution. The Hydra Flak Tank. At first you might be like I was "Ya but these aren't flyers, I have skyfire but not intercept dudes." Well skyfire also fires normally against skimmers and jetbikes, oh ya that other list the eldar seem to love.... interesting right? The additional bonus is that with the new FAQs for the Hydra, you don't get jink saves against them... now we are into the serious nastiness. So those turbo boosting bastards don't get any save... even if they are not turbo boosting from their jink! 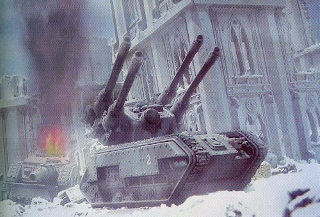 So how do you take them? Well you would want to take them as 2 squads of three, and depending if you go first or second, hold them in reserves.

So lets say you go first, you have 12, STR 7 AP4 shots at 72 inch range, from one unit, that ignore jink. oh... and they are twin linked... so you on average you should hit with 9, and get 3 glancing or penetrating hits easily enough.

That was going first, but what if you go second? You obviously do not want to start on the field, with only armor 12 front you are going to be torn up by the wave serpents, so you will want to roll in from reserves. The numbers get a bit wonkey, as you only get 6 of those 12 shots at regular BS while the other 6 are snapfiring, but with twin linked you still will average a good number of hits From the first 6 you should average 4-5, and the snap firing you shuld average 2, there by getting 2, maybe three on average glancing or penetrating hits. Now sure, you didnt take one down there... but that is a lot better than other shooting can do, and that is still only one unit firing at them...

Oh the best part of all of this, the price of a unit of 3 Hydra Flak Tanks... 225 points... that is nothing when you are talking that much firepower, which when even firing at ground units will still average 4 hits snapfiring from their big guns along, plus another hit or two from their front heavy bolters.

So for an Imperial Guard player to sink 550 points into 6 Hydras.... that is just fine, it leaves plenty of space for 3 Leman Russ Demolishers (mmmm armor 14 and STR 10 ap 2 hits) and plenty of room still for our flyers and troops. 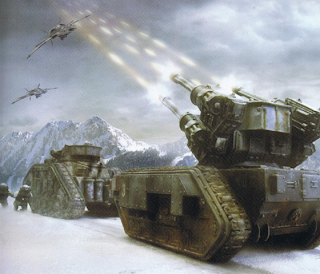 The low cost of Hydras also can tempt other armies into taking guard and grabbing them as a heavy choice, allowing a nice cheap heavy that can help deal with a wave serpent a turn, let alone the damage the trio of tanks can deal to a flyer....

So think on it guys, let me know what you think.

Until next time, burn some heretics, kills some mutants, and do it always.....

FOR THE EMPEROR!
Posted by Lord Solar Steve at 10:23 AM